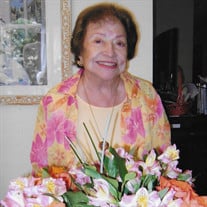 Estelle “Lydia” Valentine 1920-2019 Estelle “Lydia” Valentine, a resident of Escondido and Rancho Bernardo, passed away July 26 at age 98, less than 2 months from her 99th birthday. She was a counselor and teacher in North County schools including Escondido, San Pasqual and San Marcos High Schools. She was born in Nogales, Arizona to Rafaelita Rochin Uriarte and Castullo Lopez Uriarte as one of six children. Her father, an electrical engineer and Delco distributor, had a business near Arizona’s Rey mine. The family returned to Mexico and she was only about 8 years old when her father died in the turmoil of the Cristero Revolution in the small town of Atenguillo, in the state of Jalisco. The family emigrated to Los Angeles at his bequest for a better life but the Depression era was challenging. She attended St. Francis de Paul, a Methodist girl’s boarding school, where her mother also worked. Graduating from Belmont High School, she became a WWII “Rosie the Riveter” at the Goodyear tire factory and then an executive secretary at the Carnation Company and Fireman’s Fund. Seeking adventure, she applied to the Office of Strategic Services (OSS), the precursor of the CIA, and was sent to Salzburg, Austria to transcribe the Cold War activities of U.S. secret agents. She always recounted how she was approached by a foreign double or triple agent posing as an Englishman and returned to marry her future husband while the OSS was recruiting her to entrap him. William “Bill” Valentine, a former WWII Army Air Force pilot and swim coach, was taking graduate classes towards his teaching credentials at USC when his love letters and a ticket for the Queen Mary brought her home to marry in 1952. Bill had convinced Lydia to start teaching as well. Their love of travel started after a year’s sabbatical in France and Spain with their two young daughters, Denise and Kathy. Lydia was a graduate of Cal State LA and obtained her M.A. from San Diego State University after the family moved to Escondido. She spoke her native Spanish fluently and instilled the love of travel with her family, going on summer breaks to Mexico and Europe. She loved to dance, listen to Latin music and was a great cook. They entertained many friends and family with good food and “Uncle Bill” teaching all the kids how to swim in the pool. Upon retirement, the couple moved to Rancho Bernardo, joining many clubs such as the North County Smooth Dancers, taking classes in ballroom dancing and Lydia pursuing hobbies such as china painting. Lydia made several trips to China, and the couple also traveled to Africa and Eastern Europe among their trips. She made her last trip to Europe on a river cruise at age 92 after the death of Bill in 2013. She attended World Affairs Council meetings and studied French up to age 96; we appreciate the help of all her wonderful caregivers. The apple of her eye was her granddaughter Tatiana Valentine, and she never missed a performance including a trip to Carnegie Hall at age 94! She is also survived by her daughters: Denise and Kathy of San Diego, as well as many nieces and nephews. She was the last surviving matriarch in both the Uriarte and Valentine families. Mrs. Valentine will be interred next her husband at Miramar National Cemetery and a private Celebration of Life will be held by the family. She leaves a legacy of family and friends, who will remember her spirited and energetic personality and the many adventures she led in her lifetime.

The family of Estelle Lydia Valentine created this Life Tributes page to make it easy to share your memories.

Send flowers to the Valentine family.