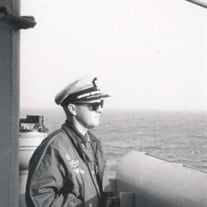 Harry Eugene Carter, retired US Navy Captain, was born on November 25, 1923 to Catherine and Harry Carter in Los Angeles, California. He passed away peacefully in his sleep at home on Friday August 14, 2020 in Valley Center, California with his wife Ellie at his side. In his last days he was surrounded by those who loved and cared for him, with lots of smiles and hugs. He is laid to rest at Miramar National Cemetery in San Diego, California. Harry grew up in Los Angeles, California, graduating from Canoga Park High School where he held the record for the highest points during a single basketball game (50) for almost 50 years. On graduation he applied to and was accepted to the Navy Aviation Cadet program to train pilots during WWII. Upon graduation from this program he flew B24s in the European theater until the end of the war. After a short stint flying Navy hurricane reconnaissance, he then attended the University of Southern California to acquire his bachelor’s degree needed as a Naval Officer. In 1949 he was assigned to shipboard duty which took him through the Korean War and the Vietnam War. He was awarded his first command in 1956 of the USS Durant which then led him to an outstanding career of multiple shipboard commands. He also served as Naval Attaché to Pakistan in 1965/1966 and Military Assistant Director to Thailand in 1969/1970. Harry retired after serving 31 years in 1973 and returned with his family to San Diego, California. In 2012 he wrote and published an autobiography of his amazing Naval career: “The Life and Loves of a United States Naval Aviator“ (https://www.amazon.com/Loves-United-States-Naval-Aviator/dp/147595073X) He met his beloved wife of 64 years, Ellie, in Los Angeles and they were happily married on St Patrick’s Day in 1956. They traveled the world together as a Navy family with their two children and enjoyed a wonderful 47 years retirement filled with family, friends, fishing, golfing, cruising (he had to go back to the sea somehow) and enjoying life to the fullest. Harry is preceded in death by his mother Catherine and his father Harry, and his siblings Jenny, Tom and John. He is survived by his wife Ellie of Valley Center CA, his son Casey Carter of Cabo San Lucas, Mexico and his daughter Buffy Hyler of Escondido, CA. He also leaves behind two grandsons of his son Casey and his wife Maricela: Nico and Michael Carter along with their babies (Harry’s great grandchildren). And he leaves behind another grandson of his daughter Buffy and her husband Jim: David Hyler. His family was everything to him and he loved them deeply. A favorite quote of his: all that truly matters in the end is that you loved. Harry lived and loved a full and adventurous life. Fair winds and following seas, Captain! You are and will be deeply missed by us all

Harry Eugene Carter, retired US Navy Captain, was born on November 25, 1923 to Catherine and Harry Carter in Los Angeles, California. He passed away peacefully in his sleep at home on Friday August 14, 2020 in Valley Center, California with... View Obituary & Service Information

The family of Harry Eugene Carter created this Life Tributes page to make it easy to share your memories.

Send flowers to the Carter family.